A good video game headset needs to do a few things. It needs to provide the user with clear enough sound that he or she can interact with a game effectively. It needs to have a good enough microphone design that the player can communicate with a team. It also needs to be comfortable enough to be worn for several hours – definitely a factor that most headsets haven’t quite mastered.

A comfortable set of headphones should be light enough not to weigh the head down, be adjustable so that multiple users can get something out of it, and shouldn’t make the user sweat during a gaming session. These are tough criteria to meet, especially when considering the other factors above.

Below are some of the most comfortable gaming headsets available. Each finds a unique way to fulfil all the major goals of a good gaming headset. Each also has some unique features of its own, some of which fill other gaming niches. Figuring out which headset works the best is a matter of determining what is most important for the individual gamer.

On paper, the iRush PC Game Headphones have all the features you want. The unit has excellent sound design, comfortable construction, and even a few adjustable settings that help most players get more out of the device. It’s exactly the kind of headset most people pick up when they’re trying to get more out of a game’s sound design.

Looking at the set, you’ll also notice that aesthetics were a major design focus. These headphones look as good as they feel, while extra power dedicated to the LEDs so that they stand out. These headphones aren’t so bright that they’ll light up an empty office, but they will definitely provide you with a unique look while you are playing your games.

While comfort is clearly a major selling point, this headset really excels when one is talking about ease of use. This iRush unit is designed with the twists and turns of daily use in mind, so it stands up to most wear and tear. It also puts a great deal of effort into making sure that the wires don’t twist or wear out, which helps to keep the headset working for much longer than most of its contemporaries. While this might seem like a minor engineering point, it solves a problem to which many other headsets still fall prey.

The Sades SA902 headphones definitely prioritize comfort. It’s not just the comfortable headband that makes them so useful, but also the ventilated design. This is one set of headphones that was designed by people who understand exactly how hot one’s ears get after hours of gaming. The vented design helps to prevent sweat and makes it much more comfortable for gamers to use even during marathon sessions.

Another great nod towards comfort is the total over-ear design. Unlike most headphones, these are made to fit all the way over the ears of the player. While this would be quite uncomfortable in most cases, the vented design helps to alleviate the more common problems. The combination of the two features means that most outside sounds are easily cut off while still providing the player with a fair bit of comfort. It’s a unique solution to a very common problem – one that certainly should entice many players.

In addition to the comfort features, there are also a few great sound features in this headset. Perfectly engineering for gaming, it helps to keep the highs and lows stable in a way that really pleases the ears. It’s a huge step forward from more traditional over-ear headphones. 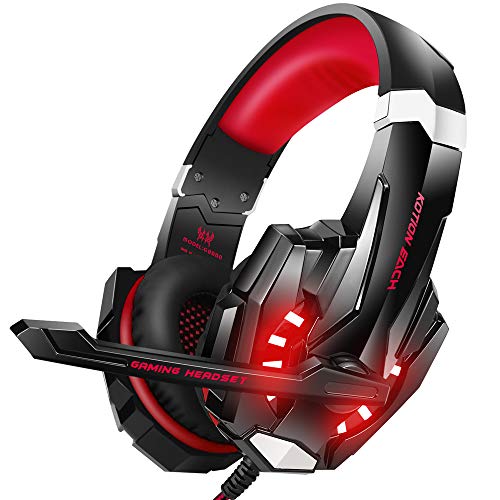 The BENGOO G9000 goes a long way towards solving some of the typical problems associated with gaming. It’s a headset meant to work specifically with the type of audio most commonly used in games, helping to deal with some of the audio problems that tend to come with the highs and lows of video game sound design. It’s also a unique headset that really works to keep the player’s audio centered within the game.

Part of what makes the headset stand out is the noise cancelling microphone. A useful tool in most situations, it really shines when it comes to video games. By helping to keep out the outside noise that is usually encountered in most games, it helps players to communicate better with their teams.

What makes this headset really work is the human-centered design. The comfortable headset is light and easy to wear, with a design that keeps hearing health in mind. It also has a few features meant to reduce sweating, which can come as quite a relief for those players who like to wear headphones during marathon gaming sessions.

The Logitech G433 Wired Gaming Headset is an interesting product from the computer peripheral maker. With its unique color scheme and fabric shell, it certainly stands out more than most of Logitech’s devices. It’s certainly engineered for comfort from the outset, but it still has the guts of a Logitech device. That means that the player can count on the headphones working exactly as advertised every time.

The sound design is also fairly impressive. The headphones use special drivers to maximize sound from the PC, giving it an edge over many typical Logitech sets. It’s certainly a major step forward for a company that is better known for being functional than for being spectacular.

Perhaps the best selling point is that these headphones are made to work with a variety of different gaming devices. While they are native to the PC, they also work well with many gaming consoles. This is a fairly major deal to anyone who already owns a clutch of headphones for their various devices. Being able to go down to a single set of headphones for gaming without giving up sound or comfort is something that should entice most gamers.

If you’re familiar with the world of gaming peripherals, you already know a bit about Razer. A long-time name in the video game world, the company has often been known for its accessories. While millions of gamers already use the keyboards and control pads, the company has also begun to make a fair bit of headway into the ear phone space. It’s done so by sticking to its roots and providing solid devices that stand up to a great deal of use.

While these headphones don’t look like anything special, they do have a few great selling points. The newly-designed headband makes for a both a comfortable fit and a greater degree of durability. The retractable microphone reduces a number of common comfort issues. Even the headphones themselves are designed to allow players to play longer without worrying about any major discomfort.

All that would be worth mentioning even a standard set of headphones, but the Razer Kraken goes a step beyond with its sound design. The headphones are tuned to allow better highs and lows, making for an extraordinary audio experience. While the headphones might not be as flashy as some of Razer’s other products, they definitely still have it where it counts.

Comfortable is probably the best way to describe the SteelSeries Siberia v3. While it is certainly well-constructed and has excellent sound quality, there’s clearly a lot of work that was done to make this headset more comfortable than average. It beings with a lighter-than-average frame, of course, but there’s far more to this headset than weight.

The memory foam ear cushions are a major step up from the materials used in the average headset. They help keep the headphones situated on the head easier and help to reduce some of the fatigue that comes from wearing earphones. While there are several other headsets that use the same type of material, it’s far from common for a gaming headset.

This headset also has a great microphone. Easy to use on its own, it has the distinction of being able to be quickly stowed on the ear cup. Coupled with an easy-access mute button on the headset itself, this is one microphone that certainly lends itself to the world of online gaming. Few headsets put as much work into making the microphone game-friendly as this one.

Sennheiser is another one of those names known for quality and this headset doesn’t disappoint. With fantastic sound quality and great clarity, it helps to ensure that every single sound effect in the game is delivered in the best method possible. This is high-end sound in a device that’s still clearly engineered for online game play.

There’s more to this headset than just sound, though. It also puts comfort front and center. The ear pads are designed to help the skin breathe and to reduce sweating, while the headset itself is designed to keep the head cool. It’s another headset that has taken a novel approach to the problems found during marathon gaming.

The headset also features technology meant to ensure clear communication. While incoming sound might be the typical focus of this kind of headset, it’s nice to see a company commit to outgoing sound as well. The microphone cancels out most noise and the volume controls are all situated in a way that keeps conversation flowing naturally. Nothing here is new or particularly special, but having it all in one place makes for a better quality product.

Another comfortable headset from Sades, the SA903 has most of what makes the 902 work well and adds a few extra features. It’s not necessarily a huge step up in terms of quality or comfort, but it definitely works well for a different audience. It’s definitely a little more aggressive in its design scheme, which might make it a better fit for those who want something that fits the games they play.

The Sades SA903 has everything you’d typically want in a comfortable headset. It is easily adjustable, has all of the usual comfort features, and – most importantly – filters out most of the sound from the outside world. It’s also got an excellent microphone that helps to filter out noise from those in the room, helping to keep conversations in-game without any real loss.

It’s the aesthetics of this headset that really make it stand out, though. Available in several different colors, it’s one of the few very comfortable headsets that seems to put form above function. With a unique shell and an angular design, it definitely screams that it was made for hardcore gamers. While still comfortable, it’s definitely a flashy design.

At the opposite end of the design spectrum is the Sades SA928. While just as comfortable as the other two products listed here, it’s definitely a more utilitarian design. This is not a headset that screams out that it was made for gamers, but rather one that looks like it was made for sound quality. It’s a simple design, but one that obviously solves a number of very common problems.

The SA928 is light, comfortable, and easy to wear. Its headset design makes it very hard to break but incredibly easy to adjust. It’s the kind of headset that is meant for constant, daily play. While it might not look particularly special on the outside, it’s very easy to tell how comfortable the headset will feel even from a glance.

Outside of comfort, this is still a good headset. Its virtual sound system allows for great sound quality without sacrificing weight or comfort. The microphone is durable and cancels out most noise. It even works with most video game consoles without requiring a lengthy set-up process. It’s a simple and easy to use headset that certainly puts function above form.